How a sleeping drug awakened a patient with akinetic mutism

Akinetic mutism is a rare disorder of diminished motivation where patients are awake, but in a state of profound apathy, making them indifferent to pain, thirst or hunger. Dutch researchers decided to test a sleeping drug called zolpidem on an akinetic mutism patient called Richard. Allie Nawrat talks to one of Richard’s doctors, Dr Hisse Arnts, about their ongoing work.

One day a 29-year-old Dutch man called Richard choked on a piece of meat while out for dinner with friends. He suffered a heart attack and oxygen deprivation, causing severe hypoxic brain damage. Although Richard experienced some neurological recovery, he was no longer capable of spontaneous movement and was unable to speak. He was therefore transferred to a nursing home without a formal diagnosis of his hyporesponsive state.

“Patients with akinetic mutism are actually awake, but are in a wakeful state of profound apathy, seemingly indifferent to pain, thirst or hunger,” explains Amsterdam University Medical Centre neurosurgical resident Dr Hisse Arnts who worked with van Erp on Richard’s treatment. This is because motivation is generated by the brain so after a brain injury, patients with this condition remain awake, but lack the drive to speak or walk.

Dr van Erp approached Richard’s family to discuss treating him with a sleeping drug called zolpidem, a GABA receptor agonist that acts as a sedative and hypnotic, as previous studies suggested that the treatment had paradoxical effects in patients with severe brain injuries.

Arnts notes the doctors and family agreed they had “nothing to lose” from trying this drug. However, the results were more spectacular than they could ever have imagined.

Zolpidem and the ‘spectacular awakening’

Although previous studies of zolpidem in patients with severe brain injuries showed “minor improvement in movement of subtle signs of consciousness”, explains Arnts, the sleeping drug amazingly caused Richard to speak for the first time in eight years. On hearing the news while cycling to another nursing home, van Erp “almost fell off her bike from the surprise,” Arnts remarks.

The zolpidem caused Richard to begin communicating spontaneously with his nurse and was able to talk to his father over the phone. He was also able to get up from his wheelchair and walk around with assistance.

The team found out that the more often the drug was administered, the less effective it was.

Unfortunately, this ‘spectacular awakening’ of Richard only lasted for two hours before he relapsed back into his diminished motivation state. And more bad news was to come as the team found out that the more often the drug was administered, the less effective it was.

In fact, after the drug was given for more than a couple of consecutive days, the effects totally disappeared. The nursing staff, therefore, began to only administer zolpidem to Richard on special occasions such as his birthday or family visits.

Arnts, van Erp and their colleagues decided to research zolpidem’s seemingly paradoxical mechanism of action in akinetic mutism and why its effects disappeared. They published their analysis in November 2020 in the journal Cortex.

They carried out electroencephalogram (EEG) and magnetoencephalography (MEG) scans on Richard to measure his brain activity without zolpidem. To the doctors’ surprise, “the EEG and MEG scans showed that there is an ‘over-activity’ of specific brain rhythms in the brain of the patient. That’s of course in contrast to what we see: a mute patient in a wheelchair. We would expect little or no activity in the brain,” explains Arnts.

The EEG and MEG scans showed that there is an ‘over-activity’ of specific brain rhythms in the brain.

“This ‘overactive’ brain rhythm causes some kind of chaos in this brain [which] is the reason that different parts of the brain can’t communicate with each other”.

The scans then showed that “zolpidem actually reduces this amount of ‘over-activity’ or chaos within the brain” so that normal communication between different parts of the brain can re-occur, meaning normal brain functioning returns, according to Arnts.

Arnts uses a musical metaphor to help explain this phenomenon. “If you compare the function of the brain to a large string orchestra, in our patient the first violins play so loudly that they drown out the other members of the orchestra and people can no longer hear each other,” he says. “Zolpidem ensures that these first violins play more ‘pianissimo’ so that everyone plays in time.” 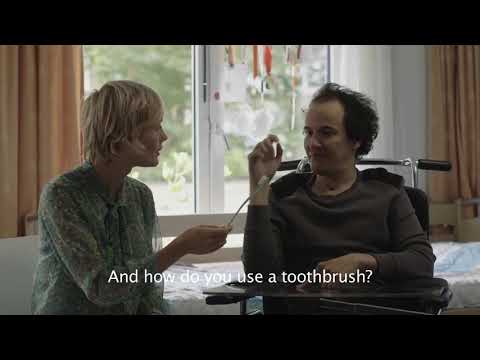 The need for a more permanent solution

As Arnts and his colleagues from Amsterdam University Medical Centre had experience in deep brain stimulation (DBS) and knew that that procedure had similar effects on brain rhythm as zolpidem. They decided to find out if DBS could cause a “more permanent return of function to our patient”. In addition, Arnts notes that DBS is a very safe treatment, meaning it has a favourable risk to benefit ratio for use as an experimental treatment.

In late 2020, Arnts and his supervisor, neurosurgeon Dr Pepijn van den Munckhof, carried out the DBS procedure on Richard. They have already seen “spectacular, more permanent improvements in his condition”. For instance, he can now walk without a walker, eat by himself and talk. “He is so much better that he [now] doesn’t need any zolpidem or any tube feeding”, states Arnts.

Hopefully we will eventually unravel the pathological mechanisms that inhibit patients in their recovery after brain injury.

Despite this, Arnts notes his condition does vary from day to day so the team are working to optimise the DBS parameters. They are hoping to publish a paper about this work with Richard, but Arnts says they are being slowed down by Covid-19 and a desire to figure out the long-term nature of the procedure’s impact on his condition.

Arnts is very clear that the impressive results they have seen so far in Richard cannot necessarily be extrapolated to all patients with akinetic mutism and other disorders of consciousness. But the plan now is to study zolpidem and DBS in other patients, and then attempt to figure why certain patients respond, while others do not. “Hopefully we will eventually unravel the pathological mechanisms that inhibit patients in their recovery after brain injury,” says Arnts.

He concludes: “It is our belief that these severely-injured patients, that are often neglected in modern medicine, need careful academic attention and that DBS might hopefully restore their ability to communicate with their families or eventually allow the possibility to rehabilitate them.”